The World's Fresh Ornament
by

The following essay and image of Queen Elizabeth can be seen in the stairwell to Grays Inn No. I the former residence of Francis Bacon 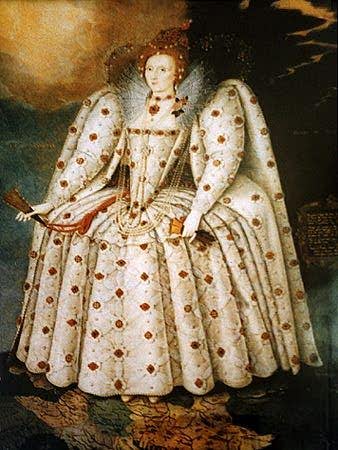 Called "Beauty's Rose". I uttered thorny lies to make England great
Defending a world oppressed a target of this world's hate
The Spanish Armada came sails billowing in a mighty show
How the Lord he cloth favour me, see how the winds blow
As a lioness defending her cubs, I defended my island home
Defiant of Spanish might, defying the Pope in Rome
Yeah! I was glorianna sceptre, diadem of a golden age
Clipping Philip's beard while he went red with rage
I was a stay at home Queen who never set foot on a foreign shore
This blessed plot, this England, was my little world, why should I ask for more
Leicester was my husband, my true love and I his loving Queen
Essex and Bacon were my hidden Tudor sons, always remaining unseen
Faithful Burleigh served me forty years up to his cantankerous end
He was minister and mentor but above all he was my friend
I now recall Hatfield and the Belltower wherein my life hung by a thread
The Queen of Scots and my mother the block that filled me with dread
My Tudor father with Tudor temper the exercising of his terrible will
His seeking out male heirs, discarding of wives, his orders to kill
Like my Tudor grandfather, I kept within the bounds of my purse
Practising frugality not making my name among my people a curse
My policies were dictated by necessities as those necessities unfurled
I was a woman under suspicion in the eyes of a suspicious world
My love Leicester died then Burleigh & I executed Essex at terrible cost
Forcing Francis to prosecute his brother he like a little boy who's lost
When Essex challenged my prerogative it led to his ghastly ruin
That Tudor son of mine should have stopped what he was doing
Fourteen days I lay dying, a heartbroken mother who was once a wife
God rest my soul I say goodbye forever for I was so weary of my life