What does Francis Bacon Mean to Me?

Well first off I think of the poet Alexander Pope's comments about Bacon back in the 1740's. He said that Francis Bacon was the "the wisest, brightest, meanest of mankind!" Pope's strange comment (only for us) can only be understood in the era it was passed down from as the word meanest was associated with being humble. Many commentators have misunderstood or have failed to understand Pope's intention. Then again there are many commentators and biographers who have misunderstood or failed to understand Francis Bacon. It's as if Bacon defies being categorized that makes him so elusive to the pedestrian and linear academic minds. Yet we have been handed down many great testimonies and awe inspiring tributes from his wide circle of friends and colleagues assuring us that Bacon was anything but a mean person in the context of today's use of the word.

"And the Meanest (Most Humble) of things are made more precious when they are dedicated to Temples."--- Epistle Dedication in The Shakespeare Folio.1623.
We Are Such Stuff As Memes Are Made On

Also when I think of the word mean, I also associate it with a recent word added into our collective vocabulary : meme.(1) This concept of self-reproducing ideas was first introduced by biologist Richard Dawkins in 1976 with his book The Selfish Gene. A meme represents a unit of culture that is transmitted via imitation and naturally selected by popularity or longevity. It can apply to genes and gene pool activity and how they evolve and it can also apply to the way our minds have been formed via any form of behavior, gesture, skill, or any idea that can be transferred from one person to another culturally whether it be the language of fashion, art, inventions, songs, stories, ect. Takis Tzanopoulos a German reviewer ponders,

" A meme could be understood as an idea that "seeks" to occupy a brain, use it as a host and then as a tool to spread. Many memes form memeplexes and memeplexes in turn form behaviors. The more powerful a meme is the better its chances to be "hosted" or accepted and thus spread regardless of its usefullness or not and regardless of its "goodness" or "badness": if it's strong enough it will be replicated and spread.Most of the time we imitate without discrimination, without applying judgement is obvious but is it our nature? What if we taught children how to NOT imitate in such a pathetic way or how to filter and process every single thought that goes or gets created in their brains? What would happen then and where would that put the whole memetics theory?"

But some obsevers about memes make the aha point that just because something is couched in scientific terminology doesn't mean that it's science.
Lies and false ideas can form as memes just as well as truths. Lies are more catchy because they require only an emotional response for their adoption. Truth has the disadvantage of requiring attempts to make proof, which actually puts it in the weaker position.
Hello, Shakespeare authorship controversy... 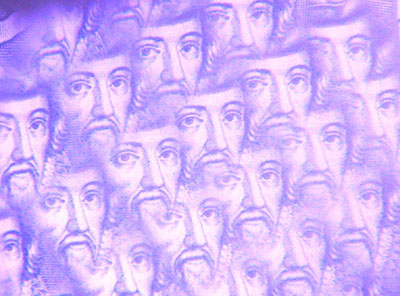 Anyone familar with Bacon's notion of the Four Idols can see how the commercial realities of the media world parallels the divisive camps around Francis Bacon's life. There are some people who can grasp his role as Shakespeare whereas there are others who regardless of how educated they are cannot fathom it as if the very nature of their world view commands them to blocking out all the pieces of the puzzle. There are 24 versions or interpretations of Francis Bacon out there in our meme pool and people select or prefer the one that fits their own truth. Whatever you think of Francis Bacon he was a man possessed with a linguistic explosion of thought, like a finely tuned instrument, dedicated to the betterment of humanity. In this way Mather Walker is right when he suggests that Bacon was a western Bodhisattva.
Bacon's Chaplain, William Rawley said, "He would light a torch to any man's candle." His massive vocabularly was so large that no one in the history of the English language to this day comes close to such a capacity and with his rare combination of rapturous eloquence and seminal writing abilities; Bacon was a constant source of inspiration to all those who knew and loved him best, a man rarely possessed with a never ending personal quest for truth and wisdom in every challenging province of learning, qualifying him to being the memest of mankind!

I wonder how Bacon would consider the concept of memes. In his Advancement of Learning.and Novum Organum he left us a kind of a recipe for a cultural meme in itself for observing truth and nature, the nature of the mind, and the cultural significance of mythology, and how it all funnels into the filters we inherit and the battle within and without to thine own self be true.

Francis Bacon for me has become an unexpected adventure in my life, a great voyage in the nature of what learning can be, a reminder of how to delicately balance reason and faith, science and God, the spiritual and the material, authority and the questioning of authority, humanity's goals and one's personal goals.

We Are Such Stuff As Dreams Are Made On

I recall a moment in November1990, it was my first visit to London and I was frustrated after a couple of weeks in not having made any "connections" to members of the Francis Bacon Society. I had left a few messages by telephone but no one had returned my calls. I gave myself just a couple of more days and then I was going to head back to the States if no contacts were to take place. Then one morning while in my hotel room I experienced an uplifting dream in which the Goddess Athena appeared like a flash out of the blue. I was now in a more enthusiastic state and feeling some special encouragement. It was the only time in my dream life up until then or since then that the great muse that inspired Francis Bacon came upon me. Within an hour I received a call from Thomas Bokenham (Bokey), the Treasurer and President of the Francis Bacon Society. Arrangments were made and a series of meetings took place with Bokey in Earls Court, with the opportunity to purchase some rare books and have great discussions. A magical ride that began in uncertainty for me has continued on ever since that morning.
When I think of Francis Bacon I consider the paradoxical nature of the stars we see up every night in the sky. Many of the stars are actually non-existent yet we are still receiving or perceiving their twinkling light 400 years later. There's a bright light of possibilities that turns on for me whenever I stop to be in the question, "What does Francis Bacon mean to me?"

1.meme: (pron. 'meem') A contagious idea that replicates like a virus, passed on from mind to mind. Memes function the same way as genes and viruses do, propagating through communication networks and face-to-face contact between people. The root of the word "memetics," a field of study which postulates that the meme is the basic unit of cultural evolution. Examples of memes include melodies, icons, fashion statements and phrases.