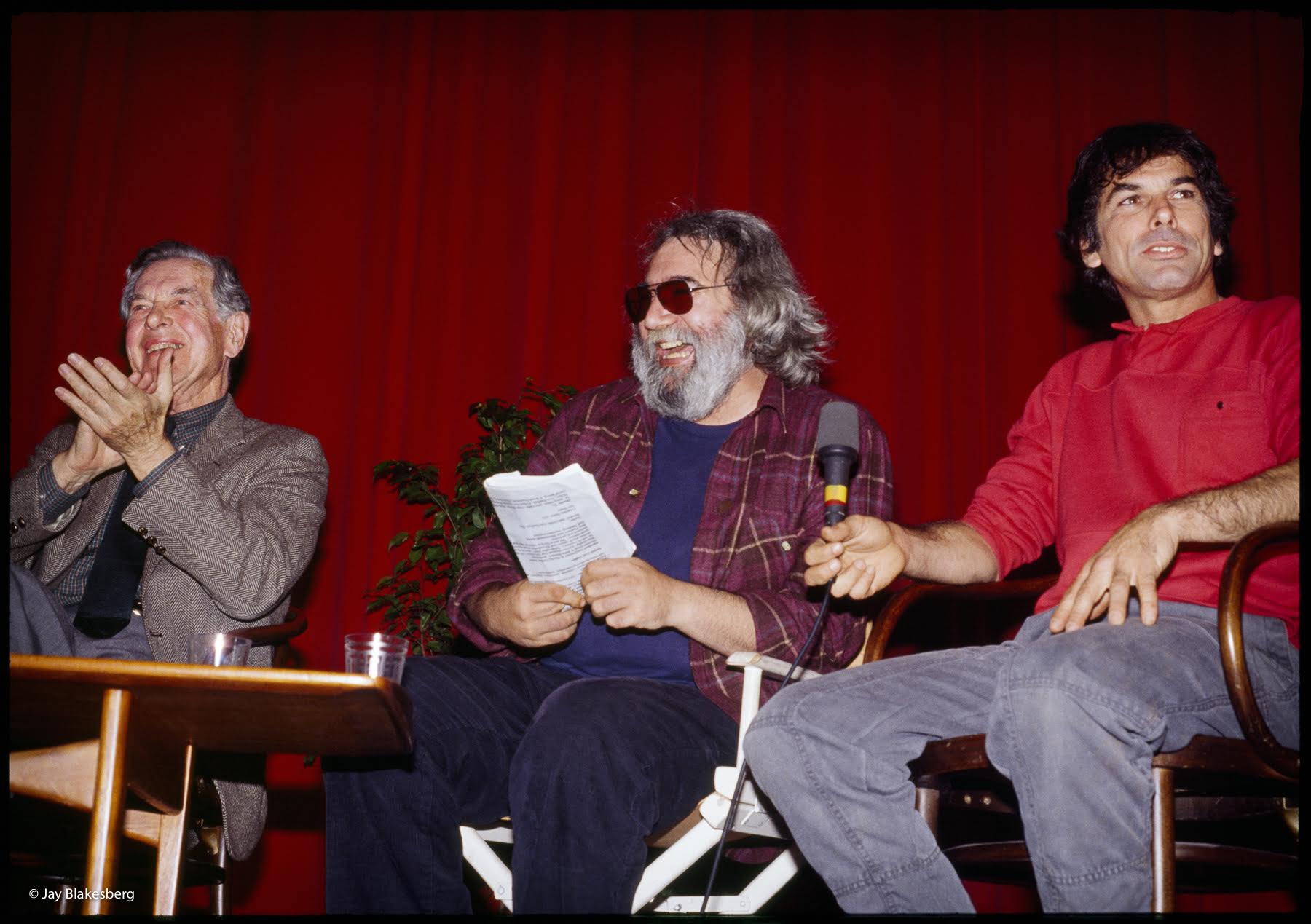 photo by Jay Blakesberg, November 1,1986 at the Palace of Fine Arts, San Francisco,
at an event called "From Ritual to Rapture, from Dionysus to the Grateful Dead"

Ritual and Rapture: From Dionysus to The Grateful Dead Part 1 Joseph Campbell Audio:

Back in November of 1986 during a Halloween weekend, a seminar was held with the great mythologist Joseph Campbell , Jerry Garcia, Mickey Hart, Jungian therapist John Perry and Ruth Inga Heinz as the moderator. The panel discussion was followed by q & a. Mickey Hart and Rand Weatherwax provided a 90 minute performance called, "The African Queen Meets the Holy Ghost," and Garcia improvised on his Steinberger guitar while Bobby Vega played bass, Richard Horowitz and Weatherwax on keyboards and Persian singer Susan Deihim sang and San Francisco Harpsochordist, Margaret Fabrizio--Lawrence Gerald)

In February of 1985, Campbell had attended a Grateful Dead concert and below are his comments from that experience.

"The Deadheads are doing the dance of life and this I would say , is the answer to the atom bomb."

" I had a marvelous experience two nights ago. I was invited to a rock concert. ( laughter in the audience) I'd never seen one. This was a big hall in Berkeley and the rock group were the Grateful Dead, whose name, by the way, is from the Egyptian Book of the Dead. And these are very sophisticated boys. This was news to me.

Rock Music has never seemed that interesting to me. It's very simple and the beat is the same old thing. But when you see a room with 8000 young people for five hours going through it to the beat of these boys ... The genius of these musicians- these three guitars and two wild drummers in the back... The central guitar, Bob Weir, just controls this crowd and when you see 8000 kids all going up in the air together... Listen, this is powerful stuff ! And what is it ? The first thing I thought of was the Dionysian festivals, of course. This energy and these terrific instruments with electric things that zoom in... This is more than music. It turns something on in here (the heart?). And what it turns on is life energy. This is Dionysus talking through these kids. Now I' ve seen similar manifestations, but nothing as innocent as what I saw with this bunch. This was sheer innocence. And when the great beam of light would go over the crowd you' d see these marvelous young faces in sheer rapture- for five hours ! Packed together like sardines! Eight thousand of them ! Then there was an opening in the back with a series of panel windows and you look out and there's a whole bunch in another hall, dancing crazy. This is a wonderful fervent loss of self in the larger self of a homogeneous community. This is what it is all about !

It reminded me of Russian Easter. Down in New York we have a big Russian Cathedral. You go there on Russian Easter at midnight and you hear Kristos anesti ! Christ is Risen ! Christ is Risen ! It's almost as good as a rock concert. (laughter) It has the same kind of life feel. When I was in Mexico City at the Cathedral of the Virgin of Guadeloupe, there it was again. In India, in Puri, at the temple of the Jagannath- that means the lord of the Moving World- the same damn thing again. It doesn't matter what the name of the God is, or whether its a rock group or a clergy. It's somehow hitting that chord of realization of the unity of God in you all, that's a terrific thing and it just blows the rest away."

From issue ten of the Golden Road it says of interest:

" The Dead originally connected with Campbell in a curious way. While jogging near his home one day, Bob Weir ran into a woman who is one of Campbell's associates. Both Weir and Hart are devotees of Campbell's work and so Weir asked if they could meet the author. He also learned that a film based on Campbell's writings is in the planning stages. The week before the Oakland shows, Mickey Hart hosted a gathering in Campbell's honor at his home. Weir and Hart have now offered to contribute soundtrack music for the proposed film. Campbell's reaction too his celebrity among rock and rollers and film Greats (George Lucas)? "To think that my work has been influential to people like Lucas and the Grateful Dead- I'm absolutely delighted !