During Bacon's time, almost every kind of device possible was used to transmit secret information, which could only be read by those who had been instructed in the secret cipher codes, keys and emblems. He and his aides seem to have been experts in the design and use of these devices.
Bacon says that

" Nature shows herself best in her smallest works....The divine artificer hangs the greatest weights upon the smallest strings."

It is not suprising then to find in the small and insignificant appearing emblem, the key and greatest revelation of Bacon's life.

HIS BIRTH
THE "IM" TITLE PAGE

The title page of a Latin translation of Bacon's Advancement of Learning, published in Paris in 1624 as De Digniate Et Augmentis Scientiarum. The emblematic picture on this title page was shrewdly designed to reveal the just identity of the author. It was designed to be of much value, and, in a narrow compass, to reveal to those who could decipher it, the true identity of the author, Francis Bacon.

The capital letters "IM" in the small oval space at the bottom of the picture are of great importance. The "IM" in Latin is equivalent to the words is, or init or I am in English. The letters "IM" are placed over an old Guild or Operative Mason's mark in the emblem, therefore Bacon is saying that I am an Operative Mason. 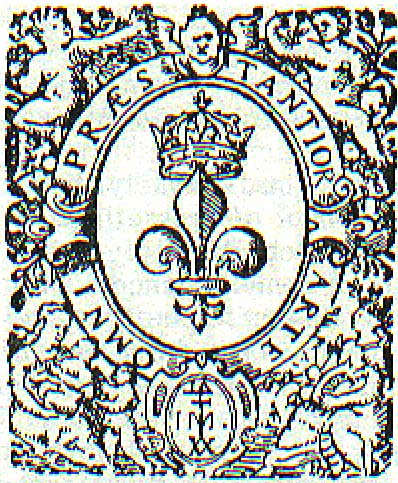 It was common practice for the Guild and Operative Mason of ancient times to place his special mark, indented, into his finished work so that each stone he processed could be easily identified. In Bacon's time, there were very few of the Operative Masons who could read or write; they used their Masonic mark as signatures. The portion of the mark extending above the letters "IM" might easily be identified as an Operative Mason's mark, and that portion extending below the letters might be considered the square and compass which is a Freemason's emblem.

If the records of the Guild or Operative Mason's of Bacon's time could be found, they might reveal that the particular mark under the "IM" was assigned to Francis Bacon.

In the larger oval space of this emblematic picture, there is a Fleur-de-lis and a Coronet immediately above it. The Fleur-de-lis has a light and a dark side which simulate the light and dark side of the "A", one of the secret signatures of the Knights of the Helmet. It was part of the Royal Arms of England from 1340 to 1801, and was used as an emblem on the coronet worn by the Prince of Wales; it was used on the coronet worn by the younger son and brother of the blood royal.
From this, one finds that Bacon is saying, in the emblem, that he is or I am of royal blood, I am a Prince.

One must consider also the outer corners and the top of this revealing emblematic picture. In the lower right hand corner there is a woman in the act of emptying the horn of plenty. This may be interpreted as the Queen, Bacon's mother, who furnished, through her horn of plenty, most of Bacon's substance during his early life, up to the time of her death.
At the top corners of this emblem are the same two children; each child in an opposite corner reaching out toward the head of the center. That head is of Queen Elizabeth who died in 1603 and is, therefore, shown with wings to indicate that she had passed on. Other writers (Alfred Dodd, Francis Bacon's Personal Life Story and Comyns Beaumont in Baconiana "The Royal Birth of Francis Bacon Confirmed Historically" and see Dictionary of National Biography under Elizabeth, Leicester and Bacon) have presented much evidence to show that Francis Bacon was the son of Queen Elizabeth, but this is the first time that the above evidence, compassed in this small emblem, has been explained.
It seems to establish the fact that Bacon was an Operative Mason and that he used much of the knowledge he had gained in his association and study of the Operative Masons in designing his order of Acception Masons-Freemasonry.

Bacon's book, Advancement of Learning, published in London in 1623, one year before the Paris publication, did not use the front piece on the title page as seen in the Paris edition. This title page would be too revealing to risk its general circulation in England. However, in the 1623 London edition, the title page showed a naked, burning heart, surrounded by an ornamental wreath. Since Bacon was of blood royal, a Prince, this emblem is appropriate to express the feeling he and his intimate friends, who knew the secret of his birth, must have had, and the intense distress he must have suffered for being cast off and rejected by his own mother, the Queen, the most noble woman of England.

Bacon knew, at least before he went to France, that Queen Elizabeth was his mother.
When carefully analyzed and fully digested, the meaning of this little emblem, reveals the most important secret of Bacon's life, and explains why he was the great mystery man of the ages. It also gives the reason for many of the strange acts of Queen Elizabeth.

This emblem declares Bacon to be an heir to the throne of England, a declaration which, if discovered during his life-time, would have been sufficient to have had him condemned to death. The emblem was published less than two years before his death. Since the above is the most logical meaning the emblem could have, if it had been discovered by Bacon's enemies, it would have been disastrous for him. Bacon was well aware of this danger and the possible consequences if the emblem were revealed.