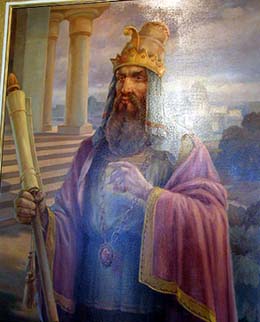 "Here lies your Brother no better than the Earth he Lies upon,
If he is That which now He is like.....He is Dead." -The Tempest

Every Masonic historian has pondered the Story of Hiram and the problem of its incorporation into the crude rite of an operative craft. Beginning with the fatal assumption that Speculative Freemasonry began in operative Lodges and that the Ethical Cult "evolved"--(ignoring the patent historic fact that the operative gild union was swept away by successive Acts of Parliament before we had a modern language in which a modern Ritual could be imaginatively expressed) --every Masonic scholar has signally failed to indicate WHO created the Hiram Legend or WHEN it was created.

It is abundantly clear that someone with a knowledge of Hermetic Rites and the Ancient Mysteries created the Story as a piece of imaginative fiction and that it was created in order that it may take the place of the Third Degree Death Rite of the Mysteries......which centered round the Death and Resurrection of their Gods. In those Ancient Days the Candidate took the place of the God as the Initiate does to-day in the Modern Mystery.There is thus a parallel between the Ancient Rite and the Modern One.
Bro. Pike says that in 1717 :

"In one of the Four Old Lodges were Squires, Noblemen, Military Officers, Scholars, Philosophers, Clergymen,. To these men must be ascribed the authorship of the Third Degree and the introduction of Hermetic and other Symbols in Masonry."

That scholars were members of such a Lodge is capable of direct proof, but it is not capable of proof that these men--acting apparently as a Committee  --created the THIRD DEGREE. It is pure guess work on the part of Bro. Pike. It is moreover, quite impossible for any heterogeneous Committee to produce a piece of Literature like the Ritual, which is essentially an Art Form of Dramatic Construction bearing the imprint of a single MIND that conceived and technically executed. There has never been a Committee yet that has produced a great Work of Art.

The reader will, however, have already noted that not only has it been proved by direct evidence that there was more than ONE DEGREE worked by the Brethren prior to 1717 (see Chapter 1), but that in the Shakespeare Folio there seems to be circumstantial evidence that suggests a knowledge by the Author of the Hiram Story alleged by Modernists to be unknown prior to 1717.

As a matter of fact, the Masonic commentator who believes that Speculative Masonry grew out of an operative trinitarian formula, cannot even suggest WHY Solomon, the Temple, the Pillars B.... and J.....,the Rites of the Mysteries (what little we know of them), the use of the Sacred Volume, the Three Pillars Wisdom, Strength and Beauty, the Apron of the Mysteries (Jason's Golden Fleece), etc. were ever chosen by the alleged "Gentlemen" or "operatives" to play such an important part in the modern Ceremonial. No one has ever suggested WHY it was done or HOW it happened.

No writer has produced the slightest evidence regarding the IDENTITY of the MAN or MEN who created the THIRD DEGREE. Refuge has been consistently taken in vague statements like Bro. Pike :

without a shred of textual, historical or antiquarian evidence. We have the equally airy opinion of Bro. Blackham :

"The whole of the Ritual of the Craft.......developed during the eighteenth century."

Needless to say we are not told WHO "arranged" it, nor is there any evidence forthcoming to pin down the "Arrangement" to this particular year. Because we only hear of the Royal Arch Chapter about this period it by no means follows that the Chapter had not been long practised in secret prior to this date. Its EMERGENCE about 1746 is a proof of the care with which our Ancient Brethren guarded their secrets from "attacks of the insidious." It is absurd really to talk of the Royal Arch being "arranged" in 1746 when there "are clear hints of the Royal Arch as early as 1723, the first express reference occurring in 1744." (Story of the Craft, p. 78. L. Vibert)

We have, virtually, little or no knowledge of the "historic" Hiram Abiff who suffered martyrdom by being slain by "THREE MEN OF SIN" at the entrance to the Temple of Solomon. There was a Hiram in the Scriptures who was a Widow's son of the tribe of Naphtali and that is about all we know. He is unknown to Jewish literature and the story of his martrydom is peculiar to Masonry alone. There is no ancient legend respecting him. It has been suggested that the Crusaders brought back the story from the Holy Land, but there is no proof that it was ever in existence save a Masonic Fable. Dr. Oliver says :

"The Third Degree is traditional, historical, legendary.....its tradition being hyperbolical, its history apocryphal, its legends fabulous."

In other words someone specially created a Hiramic Myth--marked with all the detail creative touches of genius&emdashand wove this Myth into the Art of Temple Building, no longer an operative art but a Spiritual Cult based on the sentence : "Know ye not that ye are the Temples of the Living God."
Who are the men that create Myths? Who produce our songs? Who wrote the Sagas? Who fabricate "Feigned Stories?" The songs of Badur and Beowulf? The Arthurian Legend ? The Regius Poem?
Only one type of mind.... the man of imagination. In the old days they were called Minstrels and Poets!
Someone with the mind of a Poet--one who was saturated with the Myths of the Ancient World--conceived the idea of creating a modern Rite based on the ancient one. Since he could not introduce a Pagan Christos, he introduced the Holy Temple of the Jew, three Grand Masters, one being the wisest man on earth......."Profound Solomon," a legendary Hiram Abif and a "Tragedy." That is why the Hiram history is apocrophal! Why we have teachings which bear affinities with the folklore of primitive man! Why there are analogies between our Rites and the Ceremonies of Amen Ra and the Mysteries of Holy Byblos.

"There are ceremonies even more remarkable in character connected with the Royal Arch and certaiin additional Degrees with other religious observances of antiquity." (L. Vibert, p. 74, ibid.)

One could therefore almost imagine William Shakespeare writing such words as these :

"For if I should profess that I, going the same road as THE ANCIENTS, have something better to produce, there must needs have been some Comparison or Rivalry between us.... in respect of excellency or ablilty of wit."

This actually was written by an Elizabethan [Francis Bacon]; and it is a matter for conjecture whether such a sentence as this does not refer to a return along the Road to Antiquity , the Ancient Mysteries which are to be the Model or Type of the New Ethical System of Elizabethan Freemasonry...... a system which will be better than the old one because it will be linked to the Christian idea of Love or Charity.

In any case the Masonic system was created by a man who was an Egyptian in soul, a Greek in heart, a Christ-man by conviction and an Elizabethan in expression. He was one who knew exactly what POESY stood for according to the Elizabethan standard.
This is what Shakespeare says regarding the creating of a poetic fiction around a piece of living history. In As You Like It, Act III, s. 5 :

Shakespeare therefore knew that the Poets were the Inventors of Historical Tales that were "feigned." The writers pretended they were historical (like Shakespeare's Histories), but they were not so literally, romance and imagination being mixed liberally with the real facts. He knew this as a truth because he was guilty of this sin..... if "sin" it be.

It must have been a characteristic of the Elizabethan Age because a contemporary, Francis Bacon, wrote similarly :

"By Poesy I mean nothing else than FEIGNED History."

Shakespeare's estimate of true poetry was that in order for it to be lovely,

"There must be matter as well as Art, the spontaneous overflow of a full mind stirred to the brim with true history, a knowledge of nature and especially human nature." ( Secret Society, Mrs. Pott)

Let it once be conceded that Shakespeare beside being a supreme Artist was also, deliberately, an Ethical Teacher, possessed with a great URGE--"a Philanthropia"--for the Good of Mankind and the door is once open for his active connection with the Elizabethan Fraternity. As a creative artist, of profound knowledge, saturated as every student knows with the wisdom of the East, the theogonies of vanished civilizations, he could have created the Third Degree Death Rite and the Hiram Myth without the slightest difficulty. The Creator of Prospero, Hamlet and Lear could certainly have called Hiram into being and woven around him the tragical setting. I know of no one else in the whole range of literature who could have done so.

In any case Shakespeare knew the Hiram story--whether he coined it or not--for he leaves it in scattered fragments in various parts of the plays. I place the complete story before the reader as it is told by the Immortal Bard in dramatic form as a narrative........