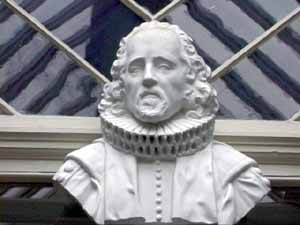 One afternoon in early April I visited the area in North London known as Highgate to see if there were remains of the estate once belonging to the 2nd Earl of Arundel and the place where Francis Bacon took his last breath before leaving this world. All of a sudden it started to snow and I thought that somewhere above Francis Bacon was winking an eye at me.
Highgate, which is noted for having one of the world's most famous burial grounds that features the tomb of Karl Marx and others is also the home I discovered of the Highgate Literary and Scientific Instituition founded in 1839.
For more than 150 years this Instituition has been the social and educational center of Highgate. They have a lending library, art exhibitions, social events, a reading and archive room, and feature high quality lectures on scientific and literary subjects. Their building is located just a few hundred yards from what is left of the Arundel estate. Walking through the front door, a bust of Francis Bacon greets you above the second entrance to the exhibition room.
The staff there are very friendly and were of great assistance to me in finding out about the Highgate history of Francis Bacon and the 2nd Earl of Arundel whose portrait can be seen in the library. Special thanks to Gwynydd Gosling, a member for sixty years who shared with me her knowledge of Arundel and provided a drawing of his once marvelous estate. For more information on the Institute and membership they can be reached Tuesday-Friday 10am-5pm and Saturday 10am-4pm, 11 South Grove, London ; Telephone 0181-340-3343.&emdashLawrence Gerald 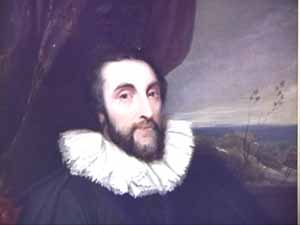 Thomas, 2nd Earl of Arundel (1586-1646) was 24 years old when he became the owner of the large estate (above left) in Highgate. He was the son of Philip Howard, Earl of Arundel, by his wife, Anne, co heiress of Dacre and Gillesland, and was born at Finchingfield in Essex on 7th July, 1586. His father died in the Tower on 19th October, 1595, attainted of treason. Thomas was then nearly ten years old and he was carefully brought up by his mother, "lady of great and eminent virtues," with his only sister, who died at the age of sixteen. By the attainder of his father he lost the family estates and titles, but was called Lord Maltravers by courtesy. On 18th of April, 1604, King James restored him in blood and gave him his father's titles of Arundel and Surrey, but did not restore the estates. When twenty years old he married Alathea, 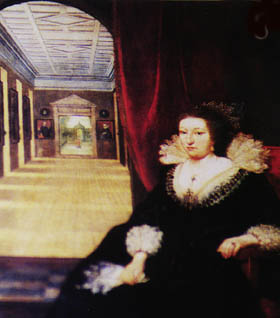 third daughter and ultimately heiress of Gilbert Talbot, Earl of Shrewsburyhheiress of Gilbert Talbot, Earl of Shrewsbury and granddaughter of Bess of Hartwick, (the one time keeper of the captive Mary, Queen of Scots,), with the help of her fortune he gave 4,000 pounds in 1607. He went abroad for his health in 1609, traveling in the Low Countries, France and Italy, where he bought immense quantities of works of art. Horace Walpole called him the "Father of Vertu" in England, and his name is linked for all time with the Arundelan Marbles presented by his grandson to the University of Oxford. Like his wife, he was brought up a Roman Catholic, but on 25th December, 1615, he was received into the English Church, to the great grief of his mother, who vainly tried to persuade him to return to the Roman faith. In 1616 he was sworn a Privy Councillor. His circle of literary and artistic friends included Francis Bacon, Lord Verulam, two of whose visits to his house in Highgate are on record, the first made when Bacon was in the heyday of his prosperity, the second when he was ill and went there only to die.
When Lord Arundel was away in Scotland with the King in 1617 Lady Arundel entertained Sir Francis Bacon, then Lord Keeper, with two Lord Justices, the Master of the Rolls (Sir Julius Caesar) and others to a grand feast at Highgate.

"It was after the Italian manner, with four courses and four table cloths, one under the another ; and when the first course and table cloth were taken away the Master of the Rolls thinking all had been done, said grace (as his manner is when no divines are present) and was afterwards well laughed at for his labour."

He was a son-in-law of Sir Nicholas Bacon, the half-brother of Sir Francis, and a very remarkable man.

In 1621, when the House of Lords were considering evidence against Francis Bacon for taking bribes whilst Lord Chancellor, (the trumped up charges manifested by his life long foe Edward Coke) Lord Arundel recommended that Bacon should not be summoned to the Bar of the House nor deprived of his peerage.

There is an anecdote from the Baconiana (T.Tenison,1679) about Bacon coming into the Earl of Arundel's garden, where there were a great number of ancient statues of naked men and women, he made a stand as he was astonished , and cried out, ' The Ressurection.' 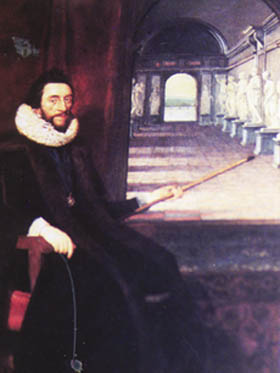 The story of Bacon's death is very well known. He is alleged to have caught a chill while stuffing a dead fowl with snow to see whether it would not be thereby preserved from decay. Being too ill to go home to the Temple he stayed at Arundel House in Highgate, the Earl being absent from home. He was put into a bed duly warmed with a pan, but it was a damp bed, not having been used for a year, and he evidently developed pneumonia, of which he died in the arms of Sir Julius Caesar on April 9th, 1626 at the age of sixty-five.
On his death bed Bacon sent the following letter to Lord Arundel, which shows that they were on intimate terms.

"My very good Lord,-- I was likely to have had the fortune of Caius Plinus the elder, who lost his life by trying an experiment or two touching about the burning of Mount Vesuvius; for I was also desirious to try an experiment itself, it succeeded excellently well ; but in the journey between London and Highgate, I was taken with such a fit of casting as I know not whether it were the Stone, or some surfeit or cold, or indeed a touch of them all three. But when I came to your Lordship's House, I was not able to go back, and therefore was forced to take up my lodging here, where your housekeeper is very careful and diligent about me, which I assure myself your Lordship will not only pardon towards him, but think the better of him for it. For indeed your Lordship's House was happy to me, I kiss your noble hands for the welcome which I am sure you give me to it. I know how unfit it is for me to write with any other hand than mine own, but by my troth my fingers are so disjointed with sickness that I cannot steadily hold a pen."

From the book, 'Philosophy for Beginners', illustration by Ralph Edney

Today there can be seen a side street, called Bacon's Lane, near Old Hall which is one of two private homes on the land that once comprised the Earl's great estate and now commemerates Francis Bacon's final days &emdash forever entwined with the history of Highgate. 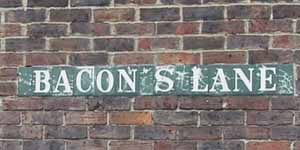