GOLDEN LADS
A Study of Anthony Bacon, Francis, And Their Friends

reviewed by the editors of Baconiana in issue no. 176
October, 1976 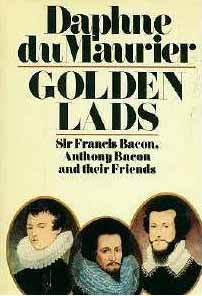 Francis Bacon, close on thirty-eight.....was feeling his way towards a command of the English language that would seldom, if ever, be surpassed. Certain of his phrases read like verse........ (p.196)

In conversation with this reviewer Dame Daphne has insisted several times that this book was designed to capture the interest of the ordinary reader but, as the above quotation shows, the more discerning reader could well be led on to a closer study of the history and personalities of a uniquely fascinating period ; and then to deeper things. This is the method employed by Francis Bacon in his acknowledged writing, in the Shakespeare Plays, and by the author in her forthcoming book on Francis, The Winding Stair. The title is taken from

Golden Lads, and Girles all must,
As Chimney-Sweepers come to dust

and the poetic touch is a reminder that we are not dealing with a professional historian, but rather with an inventive writer who has already attracted a devoted public in other fields.
Nevertheless Dame Daphne, with the help of a team of research writers (shades of Sir Winston Churchill in his History of the English Speaking Races!) has spared no pains in attempting to ensure accuracy, and indeed has made at least one discovery, namely, the charge of pederasty brought at Montauban, the capital of the French Protestants, against Anthony. Evidently the King of Navarre put an end to these charges but the popular reviewers, in their frantic search for "news" featured them. Perhaps their unanimious failure to mention Dame Daphne's repeated allusions to the Bacon brothers' and their associates' lodgings close to playhouses where Shakespeare's Plays were staged and Shaksper lived can be explained on these grounds, but not excused.....

Golden Lads is also notable for the reminder that although the date of Anthony's birth is unknown, the parish records at St. Olave's, Hart Street, in the City of London, prove that he was buried there on 17th May, 1601. Admittedly the entry in the register was published in 1894, but even Thomas Birch, author of Memoirs of the Reign of Queen Elizabeth I (1754), and James Spedding searched in vain for this information, which had virtually been lost.

We were intrigued and gratified to note that Dame Daphne, like R.J.A.Bunnett in his articles on Anthony Bacon which appeared in Baconiana Nos.148 and 149, endorses the view expressed frequently by Commander Martin Pares in Baconiana and elsewhere that Francis warned Essex on the occasion of a gift of land, and well before the treason trial, that the Crown would ever have first claim on him--especially, of necessity, when he was appointed Queen's Counsel by Royal command, despite his earnest request to be excused of this agonising duty. Dame Daphne is right to say (page 128) that

"Francis had judged him rightly from the first. Robert Devereux had all the qualities of leadership.... and because of this he must be guided."

On pages 250-1 the author, again, like Mr. Bunnett, suggests that had Francis not participated in the Essex trial Anthony would have been arrested, and Francis made it a condition of participation that this should not happen.

Our intention is that our Members should read this fascinating book, and not a long review, but to wet the appetitie we enumerate below some additonal points which should not go unnoticed in Baconiana.

1) Anthony resided for two years at Bordeaux, whilst Montaigne was preparing the fourth edition of the Essaies which appeared posthumously. The last letter Montaigne precursor of the Pleiade poets received,was from Anthony. Francis had been an admirer of the Pleiade from boyhood (p.77,78, and 52).
2) Edward Bacon, a favourite half-brother of Francis, had leased Twickenham Park for twenty-one years from 1574, and both Anthony and Francis resided there, Edward preferring to remain at Shrubland Hall, near Ipswich. The "idle pens" scrivening is therefore well documented (pages 104-5).
3) In 1594 Anthony came to lodge in Bishopgate Street near Bull's Inn and within easy reach of James Burbage's The Theatre and The Curtain, both built for play performances. James, and his sons Cuthbert and Richard, may have been related to Edward Burbage, who had been in Anthony Bacon's service. William Shaksper acted in the Burbage company, and was alos lodging in Bishopgate. This skein of circumstantial evidence was ignored by all the reviewers despite the fact that Daphne du Maurier comments that Lady Bacon's fears that her eldest son would become involved with theatre folk "were probably well founded" (pages 119-120 et passim).
4) We were glad to see in Chapter XI a rare reference to Promus of Formularies and Elegancies, Francis' notebook, so ably brought into prominence by Mrs. Henry Pott many years ago.
5) Gorhambury was adjacent to Verulamium where Cunobelus or Cymbeline had ruled before the Roman invasion. What possible interest could Cymbeline have held for William Shaksper, as opposed to the Bacon family? (p.36)
6) The Bacon brothers' constant devotion to the cause of Essex is brought out clearly in the book and we commend especially pages 236-7.
7) We were sorry that no mention was made of the Northumberland MS. which we understand is being carefully preserved by the Duke of Northumberland at his seat, Alnwick Castle : but our President Martin Pares, has already demonstrated the importance of this in Baconiana nos.160 and 163 and his booklet Knights of the Helmet. We commend also his book Mortuary Marbles.
Certain reviewers stated that Golden Lads is the first book to be written about Anthony Bacon, but although the writer has put together a most readable biography, it should be said that Olive Wagner Driver produced The Bacon-Shakespearean Mystery in 1960 ; however, this was published in the U.S.A.

Whether Golden Lads appeals to the public or not, it should not be overlooked that the author had the benefit of the transcription of over 300 letters from the Lambeth Public Library, many for the first time. More were photocopied from the Folger Library in Washington, and others read in the Harleian and Cotton MS. collections in the British Museum. Anthony's correspondence forms virtually the only source material for his life, so the importance of this research work needs no emphasis. Some but no means all the correspondence was used by Thomas Birch in his Life of Queen Elizabeth (1754), James Spedding in The Life and Letters of Francis Bacon, and Hepworth Dixon in his Personal History. Golden Lads then is a work of importance to historians as well as being entertaining for the general reader, even though it should be judged by professional criteria. Nevertheless disingenuity rather than literary insouciance may have been responsible for the pointed silence of the critics in face of the author's very significance comments on the propinquity of the Bacon brothers, Essex, and the Burbages to William Shaksper and the London theatres. The restraint of Dame Daphne in not remarking on the authorship implications could not have escaped the attention of professional historians and men of letters.
We recommend this fascinating book without reserve to our Members, and append a note from T. D. Bokenham on the Burbages whom Dame Daphne had deftly woven into the Bacon/Shakespeare tapestry.

THE BACONS AND THE BURBAGES

Daphne du Maurier, in her excellent book about Anthony Bacon, Francis and their friends, refers to the Burbage family, some of whom were known to Anthony Bacon as early as 1579 when his father, Sir Nicholas died. One of Anthony's properties, Pinner Park and Farm in Middlesex, became the subject of a dispute between Anthony and Nathaniel Bacon : the tenant was a William Burbage whose brother Robert, a Hertfordshire landowner, in 1564 sold the manor of Theobalds to Anthony's uncle Burghley, the Lord Treasurer. Some time after 1581, this same William Burbage, according to Dame Daphne, entered into a lawsuit about a house in Stratford-on-Avon with John Shakspere.

In 1593 Edward Burbage, William's son, was employed by Anthony Bacon "out of kindness of heart." He acted as courier, and Lady Bacon at Gorhambury complained of him as being insolent and ruining on of her horses. In the following year Anthony was installed in Bishopgate almost next door to the Bull Inn which was used as a theatre and was within easy reach of Shoreditch. There, in 1576, "The Theatre," the first building in England to abe designed specifically for the drama, had been erected by James Burbage, as manager of the Earl of Leicester's Men. Burbage lived in Holywell Street nearby and in 1595/1596 leased part of a large house in Surrey and converted it into another Theatre. The Dictionary of National Biography discredits the theory that James Burbage was a member of the family of that name living in Stratford-on-Avon. A John Burbage had been Baliff there in 1556 and it had been suggested, without any authority, that James' son Richard Burbage and William Shakspere were schoolfellows! In view of this new evidence, however, it does seem possible that there was some confusion over the disputant in the lawsuit.

The Dictionary suggests that it is probable that James Burbage, a joiner by trade but also an actor, had taken part, with the Earl of Leicester's troup, in the festivities at Kenilworth for the Queen in 1575 and building of his new theatre in the following year is perhaps significant. The land in Shoreditch was leased from one Giles Allen. After their father's death in 1587 (not 1594 as stated in Golden Lads), James' two sons, Richard and Cuthbert, pulled down the timber constructed Shoreditch theatre and built "The Globe" on Bankside. Richard became the greatest actor of his death, the Elizabethan Roscius, and took the lead in several of the Shakespeare and Ben Jonson plays, while Cuthbert, the eldest son, took over the management of "The Globe." The Blackfriars theatre was leased to the Queen's "Children of the Chappell" who performed some of Jonson's plays.

It is interesting to be reminded that while Anthony Bacon was resident in Bishopgate, William Shakspere became a near neighbour of his. Not too near one trusts, otherwise, according to Ben Jonson, "his breath might soil Anthony's ruff." It is also curious that in the previous year, the poem Venus and Adonis, written in the most courtly language of the day and based on Ovid's Amores, had been published with its Dedication to the Bacons' wealthy friend the Earl of Southampton and signed "William Shakespeare." Anthony Bacon's neighbour later moved to lodgings in Silver Street where Sir Nicholas Bacon had once owned some tenements. His town house had been in Noble Street nearby.

In 1634 Cuthbert Burbage applied for a grant of Arms and stated that he was descended from a Hertfordshire family, which brings us back to Robert Burbage who sold land to Lord Burghley in 1564. It seems highly probable, therefore, that the two families from Middlesex and Shoreditch were closely linked and that Anthony and Francis Bacon knew them and developed ties with them which resulted in the production of the mighty English drama which flourished between 1580's and 1630.