At the Globe Theatre in London

Now Open to the Public
Is

the New Shakespeare Globe Exhibition
the biggest in the world:

Dedicated to Shakespeare and his Workplace.

The very first exhibit one sees after entering concerns the
Authorship Question :

HOW IS IT THAT, after 250 years of scholarly research, nothing has been discovered which unambiguously links William Shakespeare of Stratford-on-Avon with literature? No manuscripts or other documents of a literary nature by him have emerged.

APART FROM SIX SIGNATURES, why are there no other documents which demonstrate Shakespeare's literacy? He is thought to have lived in London for some years while conducting a business, and maintaining a family, in Stratford. Apart from one letter addressed to him, but apparently never sent, no letters or personal papers have been discovered.


THOUGH THE PLAYWRIGHT was obviously highly educated, what documentary evidence is there that Shakespeare of Stratford had any education at all?

MANY OF SHAKESPEARE'S sources were not published in English during his lifetime. Was he able to read them in their own original languages? Did he own copies of Ovid, North, Plutarch, and more than one hundred other books recognized as sources for his plays? If not, where did he see them? There were no public libraries, and books were very rare and consequently expensive.

WHERE DID HE GET HIS INTIMATE knowledge of Court life and behaviour, Italian geographical customs, of French, Italian, Latin and Greek literature, and aristocratic sports and pastimes, all of which are referred to in the plays?There is no record that Shakespeare was ever at Court, or traveled to Italy.

WHERE ARE THE personal biographical allusions to Will Shakespeare in the plays? How intimate or convincing are they? We usually find parallels in an author's life and works.

WHO PAID SHAKESPEARE to write the plays? Though he is said to have retired a wealthy man, following his supposed career as a playwright, there are no records.

WHY WERE THERE NONE of the customary tributes from literary London on Shakespeare's death?

If the author was not the actor Will Shakespeare, then who was? Christopher Marlowe, Edward de Vere and Francis Bacon are universally regarded as the leading contenders.

The debate about Shakespeare's true identity continues to be the subject of conjecture and research. The claims of the leading contenders are here outlined by the Marlowe Society, the de Vere Society and the Francis Bacon Research Trust. 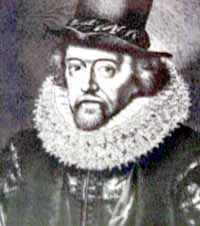 Bacon, a child prodigy grew up in an atmosphere of the highest culture and learning. He was familiar with the politics, personalities and the customs of Court, developing intimate friendships with Southampton, Shakespeare's patron, Sydney, and the Herberts, to whom the First Folio is dedicated. At age 13, he was already a student of Cambridge University studying under the future Archbishop of Canterbury, who licensed the publication of Venus and Adonis , which contains the first printed reference to the name Shakespeare.

Bacon was a noted classical scholar proficient in Latin, Greek, and Hebrew, and a multi-linguist speaking French, Italian, and Spanish fluently. He relished the theatre and poetry as a branch of learning, as a source of delight, and as a means of educating people to virtue. His home in St.Albans is mentioned often in Shakespeare's Plays.

There is an uncanny similiarity between the opinions, attitudes and interests of Shakespeare and Bacon. Both shared a fascination with history, politics, law, medicine, philosophy, the Bible and Prayer Book, birds and gardening. Bacon in his Essay on Gardens and Shakespeare's "Perdita" in the Winter's Tale were the first to list flowers according to season.

Bacon studied and practised at Grays Inn where, during the Revels of Christmas 1594-5, a performance of The Comedy of Errors was staged. The play would have been written by Bacon, who wrote other parts of the Revels. Shakespeare's Company was probably playing before the Queen at Greenwhich on the night in question, and if so, could not have been at Grays Inn.
Bacon was still alive when the First Folio was published in 1623, seven years after Shakespeare's death in which 4,470 lines were added to plays previously published in Quarto, including Othello, The Merry Wives of Windsor, Henry VI, parts 2 and 3, King John, and Richard III. The First Folio also contained 14 other known plays and 6 unknown plays.

In 1623, his friend Tobie Mathews wrote from France to Bacon, ' The most prodigious wit, that ever I knew of my nation, and of this side of the sea, is of your Lordship's name though he be known by another.'

And Ben Jonson writes in his Discoveries, 'he may be named and stand as the mark and Acme of our language.'