The Earl of Essex's Secret Birth 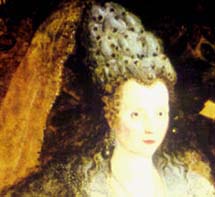 excerpt from the book : Francis Bacon: The Last of the Tudors 1921

From the union of Elizabeth with Leicester sprang a second son, Robert, born in 1567. This child also was attributed to another family, namely, to Walter Devereux, Lord Hereford.

The evidences of this are to be found in the writings of his full brother Francis, referred to in the following pages.

The Devereux Family traces its descent from Robert D'Evereux, who came over with William the Conqueror and settled in Hereford.

Passing over the intermediate generations, we draw attention to Walter Devereux, Lord Hereford, born 1541, and married in 1561 to Lettice, the eldest daughter of Sir Francis Knollys, Knight of the Garter. The young pair lived at first quite retired upon their estates and were much troubled with financial difficulties.

Lord Hereford was gradually drawn by Elizabeth to the court, and later became Governor of Ireland.

On March 4, 1572, the Queen elevated Walter Devereux Lord Hereford to the Earldom of Essex,--five years after the birth of Robert Tudor, called Essex. And in the Essex genealogical register of the 16th Century this Robert is not entered as the eldest son until after the Earldom of Essex had been conferred upon his reputed father. As heir of this title he was then put forward as the legitimate son of the Essex couple.

Thus at the outset, through the absence of two genealogical records we have two items of negative evidence that not only Francis so-called Bacon, but also Robert so-called Lord Essex, did not belong to these respective families.

The history of Robert of Leicester shows that year after year he hoped in vain to be openly acknowledged by Elizabeth as Prince Consort; also that she continually heaped distinctions upon him. Even after occasional outbursts of ill temper against Leicester the Queen was to the last ever the same in reconciliation and forgiveness.

In Froude's History of England, VII, p. 308-26, we find that, according to the records of the Simancas Archives, Elizabeth and Leicester considered the announcement of their marriage through Spanish mediation, but that Elizabeth always refused.

This does not, however, indicate that the marriage was not concluded without Spanish mediation, since Elizabeth desired to keep it secret.

Much more remarkable is a letter from Leicester in the Simancas Archives, in which he asks the mediation of the Spanish Court to secure his acknowledgment by Elizabeth as Prince Consort.

In the Leicester genealogy is recorded his first marriage with Amy Robsart, and afterwards a secret marriage with Lady Douglas Sheffield before only eight witnesses in Esher, County of Surrey.

This marriage took place two days before the birth of a son to this couple who was named Robert. This Robert was afterward Leicester's sole heir, in so far as Elizabeth had not, after Leicester's death, appropriated a portion of his estates and other properties.

Leicester did not trouble himself about this child. He was sent early to school and later to Oxford University under the tutelage of a special instructor, but entered only as the "Son of a Lord," nothing revealing his ancestry. After Leicester's death he had great difficulty in legitimating himself as Leicester's son, which was afterward accomplished through the discovery of a contract between his parents. Concerning his father, he stated that for reasons unknown to him his father had kept secret his marriage with his mother.

After three years Leicester parted from Lady Sheffield, and evidently turned his passion toward Lettice, wife of Walter Lord Essex. After Lord Essex's death he married the widow, and this marriage also was apparently kept secret from Elizabeth. This secrecy was not, however, generally well preserved, as the French Ambassador, M. de Simier, in a conversation with the Queen, casually mentioned the marriage of Leicester with Lady Essex as a known fact. Elizabeth's anger blazed up most severely. Leicester was banished from the Court, and was apparently most repentant. He withdrew from the court as an exile and stated that he would poison himself in despair. But even after this grievous affront, which Elizabeth had suffered in his marriage with Lettice, she again pardoned him and permitted him to remain near her. Leicester appeared everywhere and to the last as victor in his influence over the Queen, even though his greatest wish, to be acknowledged Prince Consort, was always denied him.

Read the book Francis Bacon: The Last of the Tudors