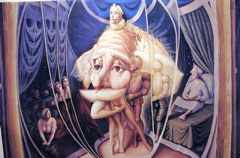 The great Sufi author Saadi of Shiraz wrote, with typical deceptive simplicity: "I fear that you will not reach Mecca, O Nomad! For the road which you are following leads to Turkestan!," Francis Carr, who is surely on the road to Mecca, has produced a thoroughly researched, impeccably argued, and beautifully written work which, in a world where objectivity and enthusiasm for the truth ruled research in the humanities, would cause proponents of Miguel de Cervantes as the sole or even main author of Don Quixote to reconsider. The stakes are high here, as high as in the Shakespeare authorship debate; for in a survey by the Nobel Prize committee of one hundred of the world's‚ foremost writers, Don Quixote was named as the greatest novel ever written. And let it never be thought that the identity of the true author is of academic interest only, affecting not one jot our response to the work at hand: for it is a portal into the vast store of the Ageless Wisdom underlying the great works of that era, a philosophical goldmine of which the modern interpreter remains largely and tragically ignorant.

A trained historian, Francis Carr worked as a private secretary to a member of Parliament, and edited for seven years the history magazine Past and Future, after which he became director of Residence Recitals, presenting monthly readings and music recitals in houses where great writers and composers once lived. His previous books are European Erotic Art, Ivan the Terrible, and Mozart and Constanze. He is, that is to say, a man of accomplishments and class, who may readily be sorted in this way with others such as Judge Nathaniel Holmes, Mark Twain, Nathaniel Hawthorne, Henry James, and Sir Edwin Durning-Lawrence, all of whom promoted Sir Francis Bacon as the true author of the Shakespeare works, just as Carr argues for his presence behind Don Quixote. One could prolong this list of luminaries considerably. The quality that links them all is that of nobility, in its truest sense, as derived from the Greek gignoskein, 'to know' and related to the words, 'gnomic'‚ and 'gnosis.' Yet, such is the mire into which modern scholarship has fallen, that to profess a belief in nobility now is routinely to be accused of snobbery.

Carr has chosen, to use a current metaphor, the‚'red ocean', strategy of engaging with orthodox academia on its own territory, of the bloodstained sea of scholarly debate, rather than a‚ 'blue ocean'‚ strategy of arguing in terms of esoteric philosophy, in which the enemy has little expertise or interest. And yet, perhaps not: for the hostile navy is in truth a sham, as enfeebled by years of protection in an artificial harbour, without ever having hazarded the Sea of Truth. For, since its publication in 2004, Who Wrote Don Quixote? with its impressive weight of evidence, has met with, not impassioned rebuttals and lively debate from the Cervantian camp, but a deafening silence. It is surely just to assert that, had this been a scientific issue, it would have had a far different reception. For science used to be called, justifiably, 'natural philosophy', and closely to study the natural world is inevitably to acquire wisdom and a hunger for the truth. And philosophy is, despite his/her pretensions to the contrary, a terra incognita to the average literary academic, as it certainly was not to the quintessential Renaissance man that was Sir Francis Bacon.

A brief tour through Who Wrote Don Quixote? will give a sense of the range and depth of Carr's investigations. The publication dates of the Spanish Don Quixote and the English ‚'translation'‚ by Thomas Shelton, as well as the complete lack of any anti-English sentiment, in the immediate aftermath of the humiliating defeats of the Spanish armadas, are suggestive that the novel was originally an English work, which was subsequently translated into Spanish. The literary career of Cervantes himself was, apart from Don Quixote, which shines like gold in silt, undistinguished in the extreme.  There is as little contemporary documentation of his connection with his supposedly ‚'major‚' work as there is in the case of Shakspere. Almost nothing is known of Thomas Shelton, and yet his ‚'"ranslation", has received ringing endorsements as one of the greatest of all time.

There is much textual evidence to suggest that Cervantes was not the true author. In the Preface, 'Cervantes', mentions that he is ‚ 'Though in shew a Father, yet in truth but a stepfather to Don Quixote', Then there is the repeated mentioning of an 'Arabicall Historiographer ', Cid Hamete Benengeli‚---a name unknown in Arabic literature‚---as its true author. Cid means‚'Lord', in Spanish, while Benengeli most plausibly means‚'son of the English', which is suggestive enough in itself. The design on the title page of the first edition of 1605 shows a hooded falcon resting on the gloved hand of a man who is hidden from view. Around the arm and the bird is the inscription Post tenebras spero lucem, 'After darkness I hope for light', a phrase from Job which was adopted as the motto of Calvinism, and later of the entire Protestant Reformation---an incongruous wording to have on a work issuing from a supposedly Catholic country.

It is in Introductory sonnets that the first firm evidence appears to indicate the nature of Don Quixote as a translation from English into Spanish--the verses in Shelton's version being more strongly written and readily understood, while in the Spanish they are generally flabby and at times incomprehensible, so that they indeed read, in fact, like poor translations. Carr might profitably have pursued the Sufi origins of the famous Windmill episode; but this topic deserves a book of its own, and he was surely right to keep his focus. Fascinatingly, this episode is thick with English references, which Carr has assiduously discovered, so that the author appears to have been thinking in writing it of an English rather than Spanish landscape. The many learned references to English history suggest that the author had a deep interest in and sympathy for that country; yet there is not the slightest similar evidence in any of Cervantes', other works.

Here is a fine example, from many, of Carr's rigour. In Shelton's text he uses a mispronounced word to denote the rustic ignorance of Grisostome, the scholar turned shepherd who dies of unrequited love after his spurning by the shepherdess Marcela:

All Cervantes could produce was the following:

There is no such Spanish word as cris; and the inference that must be drawn is that the Spanish translator failed to find an equivalent for‚ cris, and so substituted a nonsense word. No other conclusion is possible. In another erotic passage in Shelton there is clear evidence of bowdlerisation in the Spanish. The placement and frequency of the word ‚'bacon,' suggests that Sir Francis Bacon was making his role explicit. Carr provides a table of no less than sixty-nine phrases which are common to Don Quixote, the works of Bacon, and the works of Shakespeare: a nice example being ‚'All is not gold that glisters', In the novel of The Curious-Impertinent in Part 1, Camilla's maid Leonela tells her not to worry about her affair with Lothario, saying he has many good qualities, ‚'the whole A.B.C'. There follows in Shelton a list of adjectives, ‚'amiable, bountiful, courteous &c', each one exquisitely chosen for its role. Here then would be a supreme challenge for the translator‚--and the only possible conclusion again would be that Cervantes, or whoever performed the service, notably failed it.

Carr rightly highlights the Wagon of the Parliament of Death as an episode of interest. Quixote and Sancho come upon a wagon containing a fantastic group of personages‚---Death, a devil, Cupid, an angel, an emperor, a fool, a knight‚---who, it emerges, are a company of travelling players. Carr draws some fascinating parallels with the Shakespeare plays, which again suggest that they issued from the same atelier; yet he fails to pinpoint the episode's raison d etre, which resides in the company's nature as a spectacular portrayal of cards of the Marseilles Tarot deck. This opens up a fascinating line of enquiry: for, when we consider the significant Qabalistic element in Don Quixote, and the similar importance of the Qabalah-Tarot in the Shakespeare works, then it becomes clear that the two works‚---the greatest body of plays in the Western tradition, and its greatest novel--were products of the Rosicrucian enlightenment, which was driven pre-eminently by Bacon. Is there any evidence that Cervantes had Rosicrucian connections? This is a question which the orthodox camp should answer.

One would have wished for a little more on the esoteric significance of the talking head of bronze in Part 2, as a reference to the golden or brazen head as a Sufi symbol of the enlightened man; and also the placement of this scene within the larger episode of the printing house: all of which forms a single, unified allegory of the true nature of Don Quixote as a product of the pen of Sir Francis Bacon, who was‚'talking through the head', of another, just as he did in the works of Shakespeare.

Carr draws many other notable historical and literary parallels. Finally, he demonstrates his objectivity by citing the work of James Fitzmaurice-Kelly, a Cervantian who has taken Shelton to task for shoddy translations. Carr nicely skewers him, while admitting that one or two of his points may indeed have some validity. There is a suggestion here, therefore, that Don Quixote may be yet another example in the works of Sir Francis Bacon of the Master involving his front man in the writing of the project, albeit in a low level way. I have argued this position, following the work of Rev. Walter Begley in Bacon's Nova Resuscitatio and Is It Shakespeare?, in the case of the plays and sonnets of Shakespeare. It is difficult to imagine how the ruse could have been carried off had this not been the case.

The true history of Elizabethan literature is being written, then, not in the groves of academia, but in the homes and offices of private scholars. I am sure I can speak for Francis Carr in thanking the literary establishment for giving us the privilege of doing such important and satisfying research, which will survive, like Timon's tomb, long after the cleansing waves of history have shattered their castles in the sand. 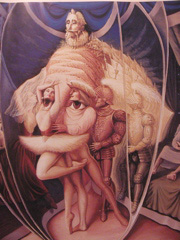 Michael Buhagiar's new book Don Quixote and the Brilliant Name of Fire: Qabalah, Tarot and Shakespeare in the Greatest Novel will appear from Xlibris Press in April 2008.