The Sublime Prince of the Royal Secret

The Marriage of Elizabeth Tudor 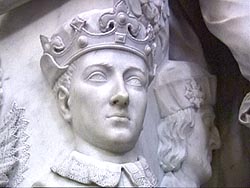 At this time the chief Lady-in-Waiting to Queen Elizabeth was Lady Anne Bacon, wife to Sir Nicholas Bacon, Lord Keeper of the Great Seal. If such a child were about to be born to the Queen, and such a birth had to be kept for the moment secret , would it not be natural for her to turn to Lady Bacon, her closest, intimate and greatest friend, for counsel and advice? To save the Queen's honor would it not be the proper and only way of escape for Lady Bacon to mother the child? It would be the most natural thing for her to assume the role of foster-mother with the active connivance of Sir Nicholas. The full dresses of the period would conceal the physical truth regarding Lady Anne no less than the Queen. In any case, some time in January, about four months after the alleged marriage to Dudley, Lady Bacon is supposed to have given birth to a child, afterwards known to history as Francis Bacon. Was she actually the mother? Was he really the child of Sir Nicholas and Lady Bacon?

The open facts seem to indicate that he was not flesh of their flesh and bone of their bone; and that they simply served in the capacity of foster-parents.
Surveying the circumstances as a whole, we can begin with the very pregnant statement made by Dr. Rawley, the first passage on the first page of "Resuscitatio, or Bringing into Public Light Several Pieces Hitherto Sleeping", published 1657,1670-1 :

"Francis Bacon, the Glory of his Age and Nation, the Adorner and Ornament of Learning, was born in York-House or York-Place in the Strand."

Dr. Rawley was Francis Bacon's Chaplain, Confidant, Personal Friend and Attendant. He was on the Square, a Rosicrosse-Mason, and knew how to write with double meanings. Apart from other proofs, we know this because he uses Masonic phraseology. On page 3 he tells us that Francis Bacon "had passed the circle of the Liberal Arts." When Dr. Rawley thus tells us that "F.B." was like Prospero, "Master of all the Liberal Arts without a Parallel," the hint is sufficient to indicate that he himself was of the secret Rosicrosse Literary Fraternity, and is speaking under the Rose secrets to those who are "instructed" how to read. (Francis Bacon was the creator of Modern Freemasonry, the Rituals of the Craft and Higher Degrees, and the Founder of the Fraternity as an organization. See Shakespeare, Creator of Freemasonry, by Alfred Dodd)

Francis, Born In The Queen's Palace

Dr. Rawley's opening statement that Francis Bacon "was born in York House or York Place ( he uses italics to draw attention to the phrase) is intended to provoke the reader to ascertain WHERE he was born and who were his parents : For "York House" was the residence of Sir Nicholas Bacon, but York Place was the Queen's Palace, afterwards known as Whitehall. The first sentence, then, raises at once the question acutely : Was Francis a Bacon or a Tudor? Was he born at York House or York Place?

If anyone knew the truth, Dr. Rawley did. He writes openly as near the truth as he dare. There would have been no point in framing such a deliberately cryptic sentence, unless he knew positively that Francis was something other than he seemed---a Prince in hiding and not a commoner. He knew better than anyone else that York House was not York Place and was never known as York Place. York Place was the name of Queen Elizabeth's Palace in the old days. So our investigations begin with a mysterious uncertainty regarding his birth. What we know is that he was born either at the home of Sir Nicholas Bacon or at Queen Elizabeth's Palace. This is the plain statement of his confidential friend and chaplain. We could not wish for higher authority.

There seems to be some uncertainty regarding the actual date of his birth. Dr. Rawley gives it as the 22nd January 1560. As the year then closed on the 25th March, the year was actually 1561, and the actual date the 11th January, "the 22nd being arrived at by altering eleven days to make it new style", says P. Woodward. (The Strange Case of Francis Tidir, p. 41) Basil Montague's Life of Bacon gives the 11th of January 1561. There does not seem to be any real evidence at all of the exact date of birth, though biographers usually assume it to be the 22nd January 1561. On this date there are some formal documents signed by the Queen, but the date on a legal document is not necessarily the day of the signature. Signed documents of this kind about this period do not negative a birth. The known facts are, that she was in residence in York Place and had no public engagements or interviews.

1631 was published in France the first biography of Francis Bacon by one named Pierre Amboise. It contains many enigmatical asides. The following sentences can be construed as covertly suggesting a Royal connection :

"He was born to the Purple and brought up with the expectation of a great career. He employed several years of his youth in travelling France, Italy, and Spain. He saw himself destined one day to hold in his hand, the Helm of the Kingdom."

Here, we again have an apparently inspired utterance which hints that Francis Bacon was born to the Purple of Royalty, and thought himself destined to steer the Kingdom.....
suggestions which cannot be regarded as being apropos to a commoner. We can align these statements with a letter written by Lady Bacon, in which she writes of Francis in these words :

The remainder of the word has been blacked out by some unknown hand, like many other of Francis Bacon's letters in which secrets are involved.

James Spedding thinks that "Chi..." must mean "Choice", a guess that is obviously wrong, for Francis was not Sir Nicholas Bacon's "First Choice." He actually left all his money to others. The fragment "Chi..." is palpably the beginning of the word "CHI LD." Lady Bacon is thus leaving a record that Francis was not her son nor her husband's. Sir Nicholas had children by a previous wife, and her own son, Anthony Bacon, was older than Francis : so Lady Bacon is simply stating enigmatically by the phrase, "He was his Father's First CHILD" that the Father of Francis was not Sir Nicholas but someone else... and that he is not a Bacon at all.

If he were not the First Child of Sir Nicholas, and was the First-Born of someone else, we know that it was not at YORK HOUSE where he was born, and that we must look at Dr. Rawley's alternative "YORK PLACE", the Queen's Residence as the place of his birth. He was therefore a Tudor, "Born to the Purple", with the expectation of holding the Helm of the Kingdom, the FIRST Child of Robert Dudley, Earl of Leicester, which carries the corallary that there was more than one child, at least a second one, for Francis was the "First" or eldest, and not the only one.

An equally significant fact now comes to light. The child is registered as "MR. Franciscus Bacon" in the Church at St.-Martin-in-the-Fields, London. The actual entry is on the first page in the book and runs :

Someone in a different handwriting, written a little later in paler ink, has added :

Now why was the babe registered as "MR."? It was contrary to all customs of registration. Would his actual parents-- if they were really Sir and Lady Nicholas--be likely to dignify a few hours' old baby with the title of "MR."? Sir Nicholas never designated his three baby sons by a former wife as "Mr. Nicholas", "Mr. Nathaniel", "Mr. Edward." Nor did he describe his boy born two years previously to Lady Ann as "Mr. Anthony." It is impossible to think that such a prefix would ever have occurred to them had he been their own child. It is similarly unreasonable to suppose that a nurse or a messenger would do so without specific authorization. It is, on the contrary, easily understandable that if Francis Bacon were really a young Prince, his foster parents would seek to dignify the babe in the only way they could, by giving him an extraordinary title as a covert mark of respect.

It is equally significant that the entry is made, apparently, in the first instance, without the name of the parent being declared. It is only later in the day, and by a different hand, that someone had added, "son of Nicholas Bacon." The "Mr." was deliberately interpolated for a purpose....for some good reason, and no historian has hitherto arisen to tell us the why an the wherefore.

SIR NICHOLAS BACON AS A FOSTER-FATHER

A comtemporary indicates that Sir Nicholas Bacon was a Foster-Father only by the following enigmatical sentence :

"He (Sir Nicholas Bacon) was the Lord Keeper of England and a Father to Francis Bacon."

We thus know that he was not THE father of Francis, but "A father", i.e. he acted towards the child Francis as a father.

A further piece of evidence is given by Mme. D von Kunow in her work, p.13 :

"In the family Genealogy of Nicholas Bacon, Francis was never entered."

This deliberate omission provides very strong positive evidence that Francis Bacon was never regarded as having sprung from the loins of the Bacons. It is a recorded act of omission tantamount to saying :

"He is not our child....He is not of our Line...We were foster-parents only."

On what other grounds could his name be left out of the family tree? It could not be the result of carelessness. It was a studied act. Taken in conjunction with the foregoing, the last act of Sir Nicholas is equally significant in witnessing the truth of the secret birth as his first act when he registered the baby "Mr. Francis". Despite repeated tokens of warm affection for Francis, Sir Nicholas made a detailed and elaborate Will, in which he provided freely and handsomely for all his dependants EXCEPT YOUNG FRANCIS. He is not left a single half-penny. " He left nothing to Francis," says P. Woodward, a solicitor. "I obtained a copy of the WILL from Somerset House." (The Early Life of F.B., p. 19)

Is not this act very direct proof that he did not regard the boy as his physical child? Why should Sir Nicholas have left his "SON" (?) penniless? There is no clear answer save one : Sir Nicholas believed that the young aristocrat would naturally succeed to riches from another source, and that hs expectations lay elsewhere.

Right throughout, the facts shape themselves exactly as we should expect them to do, if Francis Bacon were, in reality, a Tudor Prince placed with foster parents as a concealed love-child.

Two years after Francis was born, Sir Nicholas Bacon was commanded by the Queen to build a mansion in Gorhambury, St. Albans..........

See Francis, The Queen and Leicester