The following is from Baconiana, June 1956, by T. Wright:

There is some remarkable evidence in that mysterious book on Cryptography published on the Continent at Luneburg in 1624, and attributed to Gustavus Selenus, alias Trithemius, alias Man in the Moon. The author refers to Camden's Remains and to Francis Bacon's part in the production of Annals of Elizabeth; but it is the title page that is of greatest significance, for there is disclosed the truth concerning the authorship of Shakespeare.

This title page consists of four pictorial panels, each drawn in great detail, not at the whim of the engraver, but under the precise directions of the Duke of Brunswick, and thus they were intended to serve a definite purpose. J. Phinney Baxter states in The Greatest of Literary Problems that these instructions are still extant and have been read by him. If my reader would enjoy the fascination of profitable detective investigation, let him give this title page his close attention and arrive at his own solution.

There is some remarkable evidence in that myst

It is suggested that there will be detected the Duke of Brunswick placing the cap of maintenance upon the head of Francis Bacon, who is seated and writing some document of Folio size; and Bacon in a rural setting, handing some document to the rustic actor Will Shakspere, who is seen journeying on foot to some city. 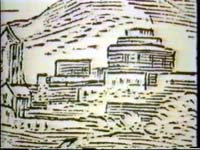 Also to be seen are the long-sword, broad-spear, shot bolt, wagstaff and walking staff, all of which are mentioned in that one paragraph in Camden's Remains. Yet further will be seen, the actor now well-mounted on horseback, but with a spur exaggeratedly drawn.

Why should a foreign prince thus devote the title page of his serious work on Cryptography, printed and published abroad, to the authorship of the English "Shakespeare?" Why refer to an insignificant work, not on Cryptography, by the Englishman Camden, and mention that the latter's most important work was finally edited by Francis Bacon? The explanation is, of course, that the Duke of Brunswick and Camden were members of that secret society which Bacon had created for the working out of his life's ideal, the advancement of learning, of which "Shakespeare" was an integral part. In BACONIANA, No. 137, above referred to, is shown a remarkable composite portrait, which is in the Bibliotheque Nationale, Paris.

Further notes on the Images from The Title Page 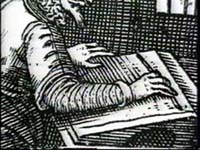 ENLARGEMENTS from above images: similarity of the right arm sleeves on the man sitting down writing and the man (Bacon?)handing off a document to the man holding the long spear (William Shakespeare?)

and wearing buskins, the footwear of an actor.

Demonstration of The Squaring Cypher Method 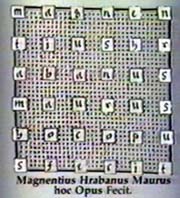 This square box of letters on page 140 of the cypher book is an example of what's called the squaring method.Thomas Bokenham who has studied the Cryptomenytices book for many years and was able to crack the code on the Shakspeare Statue in Westminster Abbey using a refinement of this cypher wrote :

"There are 36 lines, each containing 36 letters evenly spaced.Certain of these letters, each six letters apart from it's neighbor, are selected to form a 36 letter square which reads MAGNENTIUS HRABANUS MAURUS HOC OPUS FECIT. Maurus Magnentius Hrabanus who lived from776 to 856 A.D. was an Archbishop of Mainz and was said to be a great scholar. A life of him was written by the Abbot Trithemius and we are told that he invented this cypher system."