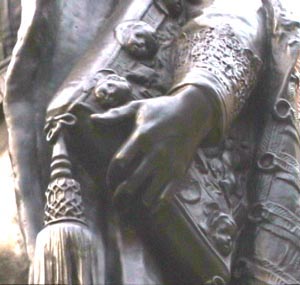 from the Bacon statute in Grays Inn Law School

In considering the utterances of his contemporaries, we must bear in mind that those of his friends who were in the secret would be very guarded in whatever they said publicly ; also, that those who were not in his confidence, but who may have guessed, would equally be cautious ; and this might arise either from good feeling to him, or even from fear of the serious consequences to themselves if they incurred his displeasure. Hence we cannot expect a large volume of plain, speaking from this source. Nevertheless the evidence is strong, and fully upholds that which we have already obtained.

Our first witness shall be Bacon's "alter ego," the faithful Tobie Mathew. He of all men, would be most sure to know a great literary secret such as the one we are investigating. Now early in 1624, that is to say just after the publication of the famous Shakespeare Folio of 1623, Mathew wrote a letter to Bacon (then Viscount St. Alban) the whole of which need not be quoted, but which contains the following striking postscript :

"The most prodigious wit that ever I knew, of my nation and this side of the sea, is of your Lordship's name, though he be known by another."

Here is one more instance where, most happily, it would appear that Bacon had been caught napping, in that he allowed this letter to survive. The evidence is so deadly that Stratfordians have never been able to counter it. Rarely do they even allude to this postsript, and only one or two have ventured on wild conjectures as to an alternative explanation of hese words. But here, as with Bacon's letter to Davis, we are bound to take the phrase simply at its face value ; and it tell us in the plainest language that he was known by another name, i. e. a pseudonym. Therefore we at once ask, Where are the writings which he put forth under another name? They would almost necessarily be poetic or dramatic, since there would be no reason for concealing his philosophical or scientific works.

My next witness shall be John Florio, a learned Italian, well known at the English Court and an intimate friend of Bacon. he is now remembered as the translator of Montaigne's Essays ; but in addition to this he translated all of Bacon's works into foreign tongues (French and Italian?)and "published them beyond the seas." He was also a member of Bacon's literary group at Gorhambury. Here is another man who would certainly be aware of this literary secret. Now in Florio's World of Words, published in 1598, he refers approvingly in the preface to a certain sonnet, written by "a friend of mine who loved better to be a poet than to be counted so"; and the interesting point is that, basing their opinions on internal evidence, both Prof. Baynes and Prof. Minto declare that this sonnet must have been written by the same author as the author of the Shakespeare works. It is not difficult to put two and two together!

Now turn to John Aubrey. He was a friend of Milton, and although born a year after Bacon's death, would be able to gather information from those who knew the great Chancellor personally. As opinions differ regarding his reliablility, I give one on each side. The distinguished Shakespearean commentator Malone writes :

"His character for veracity has never ben impeached; and as a very diligent antiquary his testimony is worthy of attention."

On the other hand, Gifford, editor of Ben Jonson's works, says :

"Aubrey thought little, believed much and confused everything."

What Aubrey wrote wrote when speaking of Viscount St. Alban was this :

"His lordship was a good poet, but concealed, as appears by his letters."

He would hardly have used the expression "as appears by his letters," had he not actually seen some of them. What letters, then, had he seen in manuscript? Apparently there must have been several, and we at the present day would give a good deal for a sight of them. But only the one to Davis has come to light.
Another important witness is John Davies of Hereford, seeing that he was at one time in Bacon's employ as an amanuensis, being by profession a teacher of calligraphy. He wrote a sonnet to Bacon, and referred to his association with the Muses, saying :

Her company for sport twixt grave affaires :
So utter'st Law the livelyer through thy Muse," etc.

Naturally Davies only appears to give the impression that Bacon wrote poetry "for sport." He would not dare to say more. But even so, there is the distinct statement that he did write poetry.

Consider this, too. In the anonymous publication entitled Wits Recreations which appeared in 1640 but was probably written many years earlier, the following lines are to be found :

Shakespeare, we must be silent in thy praise
'Cause our encomions will but blast thy bayes,
Which envy could not.

What a remarkable statement! Why, forsooth, were the literary men of those days to be "silent" about Shakespeare? And why their praise injure his reputation? Can any reasonable explanation be given which fits in with the orthodox theory? I think not. There would be no reason why the man of Stratford should not be praised, had he really been the author. But with Bacon the case was different. He could not be publicly praised as a poet.

In his Annals, published in 1600, John Stow includes Sir Francis Bacon among

"our modern and present excellent poets which worthily flourish in their own words."

Here there is no hint of secrecy ; and moreover Stow classes him as one of the "excellent " poets. Of course it may be said that Davies, Stow and others had seen some airy trifles written by Bacon, but that this is far from making him the author of the Shakespeare Plays. True ; but for the moment I am only concerned to show that he was recognized as a poet in his own day by the direct testimony of his contemporaries. The question of what poetical work he was responsible for will be dealt with later.