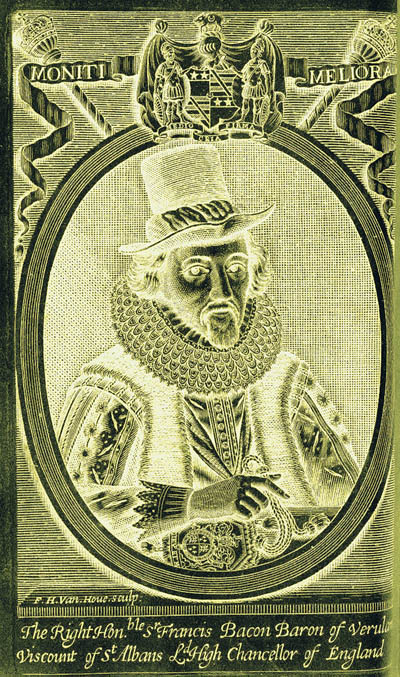 1. A short Review of all hitherto discovered

Let us proceed to a general survey and thereupon to a summing up of the facts.
Bacon and Shakespeareneither mentions the other's name. Bacon numbers Poesy among the sciences.
He holds the highest form of poesy to be the parabolic (the poesy of symbols) when presenting natural history, civil history and philosophy in dramatic form to the eye.

The Comedy of Loves Labour's Lost is a dramatic parable in th sense of Bacon's doctrine of Light and Luminous Matter. (More than 500 words relating to light and lighting, to the generation of light, strength, colour, reflection, overcoming, duration, ways, transparency, affinities and opposites; Berowne.)
The three divisions of the Shakespeare dramas, namely: Comedies, Histories and Tragedies, agree in their contents with the three parables told by Bacon, wherein he speaks of dramatic parabolic poetry, viz : Pan (natural science), Perseus (civil history) and Dionysus (passion, philosophy).

One half of the scenes of the comedies are laid in the open air, the personal names appearing therein are, for the most part, borrowed direct from natural history.
Bacon's expositions of Proteus, or mutable matter, are found again in the like named Proteus of the Two Gentlemen of Verona and in Falstaff (falling stuff or matter).

The three experiments with matter (stuff) referred to in The History of Dense and Rare correspond with the three Falstaff experiments in The Merry Wives of Windsor.

Bacon's thoughts concerning sympathy and anitpathy, the magnet, heavy and light, the serious and the merry, are mirrored in A Midsummer Nights Dreame and in Much Ado about Nothing.

The thoughts relating to usury and loans on security contained in The Merchant of Venice agree with those contained in the essay Of Usury; ideal justice as handled by Portia is, even to the senators and writers, exactly portrayed in the eighth volume of De Augmentis Scientiarum.
The last five comedies treat parabolically of that which Bacon discusses under Melioration of Species (by Grafting), Alteration of Species (by seed-crossings) and of the Sympathy and Antipathy of Plants. (Bound hands in The Taming of the Shrew; legs crossed and bound in the person of Malvolio.) The flower names recorded in The Winters Tale accord with those in the essay Of Gardens.

Astronomy, meterology, geology and geography are parabolised in the Histories (the personal names).

The moral contained in the Shakespearea tragedies stands in relation to the Baconian ethics as practice does to theory.
The chapter on Passion in Bacon's De Augmentis Scientiarium seems to be a weighty preface to the Shakespeare tragedies. Note the direct allusions to the madness scene in Macbeth and to cave den), gate; note the education of princes in Cymbeline.

The only gap in the Shakespeare Histories is filled up by the first work written by Bacon after his fall, namely The Historie of Henry VII.

Francis Bacon descended from literary and highly educated parents.
His aim was to frame human knowledge and to advance it. Jurisprudence was a secondary matter with him. The scheme for the Great Instauration of Sciences was formed in his very young days and occupied him throughtout his life.
The contemporaries who really knew him accorded him the highest praise and that in all respects.
Bacon wrote a large number of works which either appeared anonymously or under other names, such as letters, proclamations, memorials, and plays for the festivities at Grays Inn and Essex Palace.
These plays contain excellent verse in sonnet form and also such as is hidden among the prose.
Bacon spoke with double meaning as to his poetical work : Though I profess not to be a poet and calls himself a concealed poet.

A large number of dramas which subsequently bore the name of Shakespeare on the title page at first appeared without any author's name. Thereunder was Romeo and Juliet.
A full, large page of Bacon's notes, which he made before Romeo and Juliet was printed, points indubitably to a number of scenes and expressions in the tragedy. A second page of the same collection of notes points in like manner to Hamlet.

Reports were circulated in London to the effect that Bacon was the author of a story of the first year of Henry IV. and, presumedly, as to the authorship of the Tragedy of Richard II. Bacon admitted himself that the matter grew from me and then came before the world in others' names.

The breach between Essex and the Queen was constantly widening. The formerly anonymous theatrical pieces suddenly appeared in the most noticeable manner under the name of W. Shakespeare. (One of he first, if not the very first, of these was the new edition of Richard II)
The literary feature also played a part in the condemnation of the Earl of Essex.
The player Shakespeare has not left one single manuscript. His signatures show a very faulty skill in writing. His daughters probably could not write at all. Already at the age of from 40 to 50 years he returned to his native place, lived and died there and has left no evidence whatsover of having taken any interest in literary work.

The names of Francis Bacon and William Shakespeare written several times close together, are found on one of the pages of Bacon's manuscripts [Northumberland Manuscript] and these were written at a time when the name of Shakespeare first began to appear on the title page of books.
A manuscript of the tragedy of Richard II was also found in the same bundle of manuscripts.
The plan of the issue of th Bacon-Shakespeare books shows that the appearance of Shakespearean dramas was independant of the life or death of the player, whereas the matter was most intimately connected with the external life of Francis Bacon.
No other author is so imbued with thoughts of the theatrical world as Bacon. Moreover, all his scientific prose writings contain repeated comparisons and phrases from the stage world.
Noteworthy are his essays Of Building, Of Friendship, Of Masks and Triumphs and the intentional endeavours to efface his preference to the theatre.
That which is mentioned in De Augmentis Scientiarum as missing in the science of the period and which is partly, and often very fully, described as being things of the future, finds its counterpart in the dramas of William Shakespeare. Bacon repeatedly hints, but without naming them, at certain books that are neither more nor less than Shakespearean dramas (Lear)

The hang hog joke is found in Bacon's anecdotes[Apopthgms] as in Shakespearein the scene which was subsequently interpolated in The Merry Wives of Windsor. Compare these with the pig on Bacon's Coat of Arms.
Again, there is the peculiar and frequent repetition of the words Bacon, Francis and St. Albans in the Shakespearean dramas.
All that refers to falling greatness is written in the Baconian sense.
The similarity of circumstances connected with the arrest on account of an overdue bond in The Merchant of Venice and the arrest of Bacon's brother Anthony. Thus : Shylock-Sympson; Anthonio-Anthony; 3000 ducats300 Pounds.