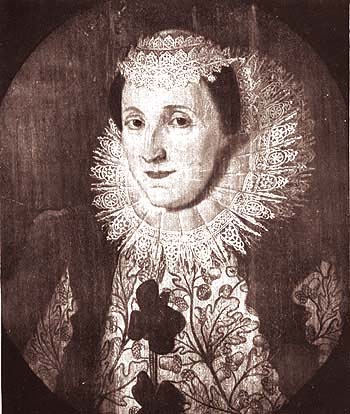 "There was a doubt at one period as to whom this picture represented, and a good time ago its modern owner allowed it to be engraved under the name of Anne Cooke, Mother of Bacon. Then a portrait of Anne Cooke came to light, with date and age written upon the canvas, and on comparing it with a bust of Bacon's mother, it was found that the features were identical, and that the portrait which had been engraved was a younger woman and must really be the wife and not the mother. Such was the opinion of the best experts who were called in. These facts I get in a letter which Lady Sibyl Fraser, daughter of the Earl of Verulam, has kindly sent me, and as both portraits are now hanging in their picture gallery of "Gorhambury", in Hertfordshire, the family are the best authorities, and I quote from them."   Life of Alice Barnham, by A. Chambers Bunten Oliphants Ltd. London:21, Paternoster Square, E.C. 4 and Edinburgh, 1928. pp. 21,22
(Thanks to GC for image-text)

On May 10th, 1606, her fourteenth birthday, Francis married Alice Barnham. A description of the ceremony taken from a letter of May 11th from Dudley Carleton to John Chamberlain :

Sir Francis Bacon was married yesterday to his young wench in Maribone Chapel. He was clad from top to toe in purple, and hath made himself and his wife such store of fine raiments of cloth of silver and gold that it draws deep into her portion. The dinner was kept at his father-in-law Sir John Packington's lodging over against the Savoy; and upon this conceit (as he said himself) that since he could not have my L. of Salisbury in person, which he wished, he would have him at least in his representative body.

Jean Overton Fuller in her bio on Bacon comments :

"The choice of purple was singular, because by a law passed in 1464, no commoner could wear purple. That was sufficiently recent for the association between purple and royalty still to be strong in people's minds, as indeed it is today. When his first biographer, Pierre Amboise, wrote in 1631 that he was "ne parmi les pourpes," (born in the purple) he was intimating royal connections. It will be remembered that Leicester's friends, to show they favoured his marriage with the Queen, wore stripes of purple.
If Francis was Queen Elizabeth's son, his marriage was important, as issue could create an alternative line of succession. It could be that this announcement of intent to marry a commoner, made in the letter to Cecil written so soon after the new King's accession, was in part intended to assure James he had no design upon the throne. His wearing now of purple would seem out of line, though he could have thought his loyalty was by this time so obvious that the little flourish would not provoke.
Yet Francis' choice of a bride remains mysterious. One feels she was not endowed with intellectual gifts or one would have heard of them. Perhaps one should not go beyond his own statement , that she was "an handsome maiden." Today we think of fourteen as far too young for marriage, yet it was not so then, although a difference in age of thirty-four years is strange."