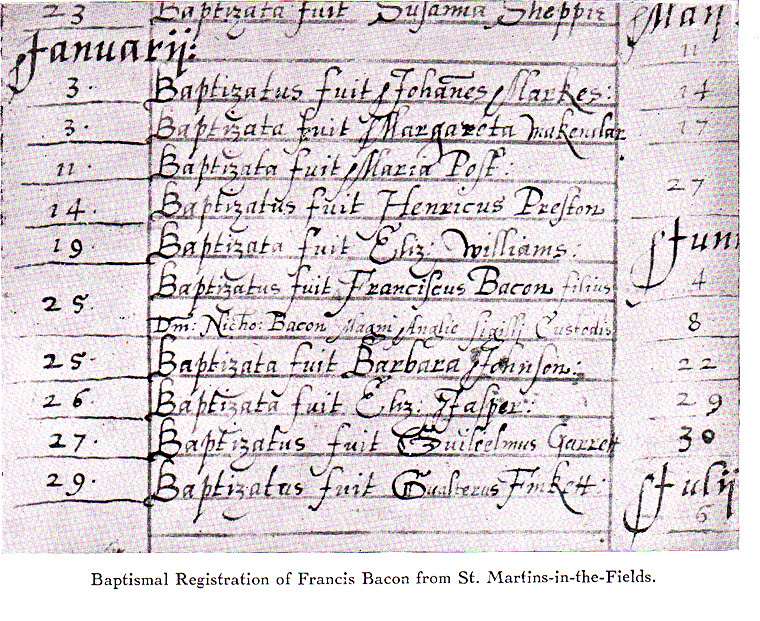 There can be seen a Mr. added before Franciscus Bacon. There was a definite reason that someone would add Mr. This was contrary to all customs of registration, a signal that this was a very special baby. It was never done with any of the Bacon's other children. (Alfred Dodd. from Francis Bacon's Personal Life Story p.39)

In one of the letters which is preserved, Lady Anne Bacon left a strong hint, writing that Francis "was his father's first chi...."inking out the last two letters as if she had said too much. Nicholas Bacon had several children before Francis, but applied to Robert Dudley, The Earl of Leicester , as father, it would have been true.( The Marriage of Elizabeth Tudor, p.26, by Alfred Dodd)

In another letter to Anthony, Lady Anne revealed that Francis was a ward, and not her true son, writing, "It is not my meaning to treat him as a ward; such a word is far from my motherly feeling for him. I mean to do him good. (Amelie Von Kunow in Francis Bacon : The Last of the Tudors, 1924. p10.)

In the official family genealogy of the Bacon family; Francis's name was never entered, the only formal connection to Nicholas Bacon being the words "in York House" added to the birth registration statement by a different hand some years later. (Amelie Von Kunow in Francis Bacon : The Last of the Tudors, 1924. p12.)