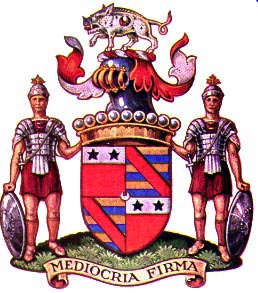 Crest : A boar passant, ermine, a crescent for difference.

According to Peter Dawkins from The Wisdom of Shakespeare in As You Like It, p.182 .....with the idea of Gemini--the twins, Castor and Pollux, of whom Sesau and Jacob are biblical equivalents. Pollux is the heavenly or immortal brother, whilst Castor is the earthly or mortal twin. The two demonstrate the two basic ways of learning--academic and experiential. The duality also relates to how the mind works in order to see and understand, using reason and imagination, or analysis and conceptualisation, which the double-edged sword symbolises.