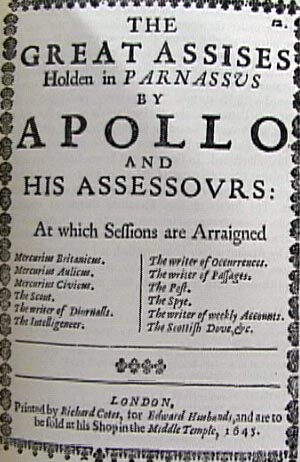 The following commentary is from The Greatest of Literary Problems

That Bacon was known as a poet by his contemporaries is proved by abundant evidence. Perhaps the most important proof of the esteem in which he was held is exhibited in the "Great Assizes Holden in Parnassus." The two parts of the Pilgrimage to, and the Return from , Parnassus were produced respectively in 1597, 1598, and 1601. "The Great Assizes" was printed in 1645. Raphael had depicted in the Vatican the triumph of antique art under the poetic influence of the Renaissance, and the author or authors of the Pilgrimage and Return framed the trilogy to be enacted at St. John's College, to depict the antithesis of the modern art of learning under the demoralizing influence of the age. We have already alluded to the Pilgrimage to and Return from Parnassus. The culmination is found in the Great Assizes convened at Parnassus for the trial of the trashy and misleading literature of the period. To the lofty mount of Learning, crowned with its temple, the university, prefigured in their dreams as Parnassus, the glorious abode of Apollo and the Muses, the lovers of Learning journey; but find, after experience, how vain have been their dreams, and return to the world disillusioned. In time the fact beams luridly upon their vision that the golden age of literature has past, and is being supplanted by an age of trashy pamphleteers and news-scribblers. The lovers of true literature thereupon appeal to Apollo, who convenes a high court to meet at Parnassus. The great authors, principally of the past, are summoned as assesors by Apollo; a jury is impanelled, and the principle malefactors, the newspapers of the day, are first placed on trial. The title -page here shown gives their names. 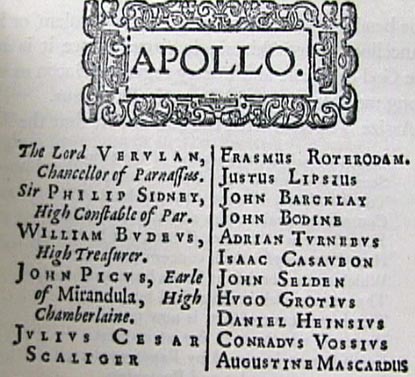 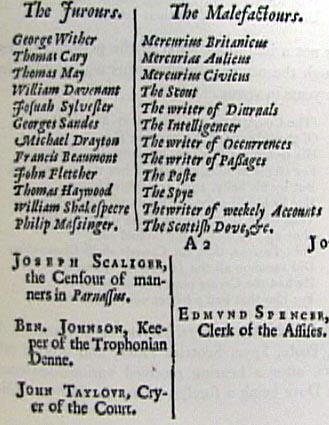 At the head is Apollo and next to him is Lord Verulam, or Francis Bacon, his chancellor. From this single circumstance it is evident that the God of Music and Poetry regarded Bacon as worthiest among mortals of the chief seat in Parnassus.

The Assize is opened with the statement, that the

Learned Scaliger, the second of the twaine
Second to none in Arts did late complaine
To wise Apolo, of some strange abuses,
Committed against him and the Nine Muses.
Your Grace well knowes ( I need not to relate)
How Typographie doth concern your state,
Which some pernicious heads have so abus'd,
That many wish it never had been us'd:
This instrument of Art, is no interest:
For it is now imploy'd by Paper-wasters,
By mercenary soules and Poetasters,
Who weekly utter, slanders, libells, lies,
Under the name of spacious novelties.

This is not a bad description of the periodical press of today, though the newspaper when this was written had been but a few years in vogue.

(The Court thus set) the sturdy Keeper then,
Of the inhospitall Trophonian Den
His trembling Pris'ners brought unto the barre
For sterne aspect, with Mars hee might compare
But his belly, and his double chinne,
Hee look'd like the old Hoste of a New Inne.
Thus when some Ben his fetter'd cattel had
Shut up together in the pinfold sad;
John Taylour, then the Court's shrill Chantecleere
Did summon all the Jurours to appeare:
He had the Cryers place; an office fit,
For him that had a better voyce than wit.

The obnoxious newspapers, Mercurius Britannicus, Aulicus, Civicus, Poste, Spye, Scottish Dove, and several offending scribblers, after a hearing received various sentences; the Scottish Dove, being a foreign sheet, the lightest, which was that :

Hee to his native countrey must repaire,
And was on paine of death prohibited
To crosse the Seas, or to repasse the Tweede.

As the "Great Assizes" has been misunderstood hitherto, and the present writer has made a study of the first fifty years of English newspapers in the British Musuem for historical purposes, he thinks it well to make the foregoing extracts to disclose its scope and wit, though his sole purpose in speaking of it is to show how highly the poetical genius of Bacon was regarded by his contemporaries.

The above pages published in 1645 are another example how Bacon was regarded in highest tribute by his contemporaries as a poet. It reminds one of the book of eulogies published right after Bacon's death , Manes Verulamiani , in which 32 friends who were writers and poets such as Ben Jonson, Thomas Randolf, Robert Ashley, John Haviland George Herbert, William Rawley, William Boswell and others tributed the following words of praise to Bacon :

"The Leader of Apollo's Choir,"

"The Tenth Muse and the glory of the Choir,"

Leader of the Choir of the Muses and of Phoebus,"

" Pallas too, now arrayed in a new robe, paces forth,"

"He taught the Pegasean arts to grow, as grew the the spear of Quirinus."