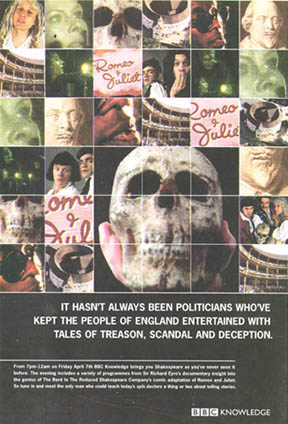 In early April 2000 , the BBC used the above image in British newspapers to promote a 5 hour broadcast (April 7) about Shakespeare on their new documentary channel. The smaller print said "BBC Knowledge" :

"brings you Shakespeare as you've never seen it before. The evening includes a variety of programmes from Sir Richard Eyre's documentary insight into the genius of The Bard to the Reduced Shakespeare Company's comic adaptation of Romeo and Juliet. So tune in and meet the only man who could teach today's spin doctors a thing or two about telling stories."

"It hasn't always been Politicians who've kept the people entertained with Tales of Treason, Scandal and Deception."

But maybe it WAS a Politician all along. Consider that in Francis Bacon's distinguished career he was a Member of Parliament for a number of years, acted as a special advisor to both Queen Elizabeth and later King James, became the Solicitor General and Attorney-General, was a member of the Privy Council and eventually through merit, awarded the Lord Chancellorship, Keeper of the Great Seal of England. Who else was in a better position to know the workings of the government on a day to day basis while observing the duplicities and corruption that existed under James? Who else would be capable of turning their personal experiences at this level into creative plots for literary scenes? "BBC Knowledge" has underestimated the genius of The Bard as having both a political and a secret literary life.

Yes it' s true there was not much output of playwriting by Bacon during his years of public service between 1611 and 1621 but after this period when he was forced out of public life he once again became prolific, revising old plays and presenting new plays that were not published before and were based on direct experiences from public service. In the play Henry VIII for example, Bacon took the liberty of mixing in detailed personal experiences that he underwent during his impeachment as Lord Chancellor in 1621 through the historical character of Cardinal Wolsey.
Timon of Athens and Julius Caesar also reflect his personal disappointments in the world of politics as do some of the Shakespeare Sonnets (which were his diary of emotion). He reveals the anguish of an innocent man having been forced to plead guilty to false bribery charges in order to save the King from political scandal.

Was there any biographical evidence presented on William Shakespeare by the BBC ? No. Because they cannot match a biography of the Stratford man with any direct evidence of his authorship. In fact nobody has ever been able to do it. In the last 50 years the BBC-TV has touched on the authorship issue only once in 1994, and it was not an in depth report.

Once again there is a renewal of great interest in the subject of who wrote the Shakespeare Plays and Sonnets. Lovers of the Bard dissatisfied with the Stratford myth who want to know who he really was can now determine for themselves what the truth is. Today, thousands of college and high school students from around the world are turning to the world wide web on a daily basis as a resource; in order to learn about the Greatest Literary Mystery of all time.

In regards to the Shakespere Authorship issue the "BBC Knowledge" is unknowingly or in the know the "spin doctor" here. They are in the documentary business which means honest investigation without pulling punches. Before taking the lead in educating the public on this controversial and popular issue they first need to advance their own knowledge about The Bard. Perhaps they can start by visiting Francis Bacon's New Advancement of Learning at sirbacon.org .

---Lawrence Gerald
your comments are welcome